In the waning edge of the disco craze, a little unknown female duo from Japan called Pink Lady began appearing on American TV.

So WHO were these girls?

Pink Lady was the biggest selling and most famous Japanese pop act of the 1970's. They scored several MASSIVE hits in Japan. And they were ready to hit America

They scored a minor Top 40 hit in America. "Kiss In The Dark" (1979) which peaked at #37. And released an English language album on Elektra Records. 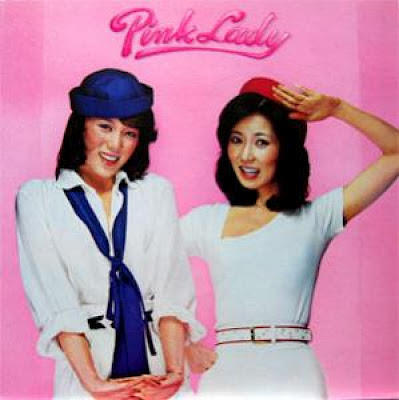 They looked sure become the next BIG thing in America. They took Japan by storm in the '70s. They were very beautiful and very talented. So in March 1980. NBC unveiled "Pink Lady" for your Saturday evening viewing pleasure.

But leave it to American TV network boss minds to completely screw it up..... 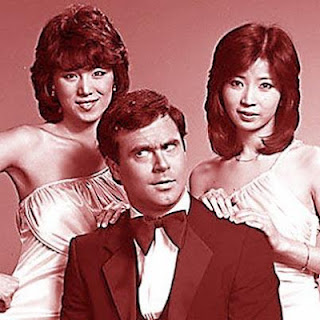 You see, Mie (left) and Kei (right) were paired with this dork, Jeff Altman (lower center.) in utterly the WORST variety TV show America has ever seen. This show was so bad, it actually KILLED the variety TV show format in America ever since.

It certainly wasn't Pink Lady themselves. Even the most attractive and talented act couldn't survive a TERRIBLE production.

First, the music on the show was primarily disco at a time when disco was on it's deathbed. Power Pop bands on one end and Adult Contemporary music on the other were dominating the Top 40 charts at the time.

On the first episode of the series (and this is on DVD too. ) He made one particularly shocking comment. Even in that less politically correct year, our jaws dropped

"You just get turned on by my sexy round eyes."

Off in the distance, you could already hear the sound of millions of people changing the channel.

Bizarrely, these girls seemed to take it all in stride. That was because they actually didn't know what was being said. Pink Lady themselves knew very little English. And most of their direction came off-camera and for each sketch, they had to memorize lines they didn't understand.

Finally, this show was aired at prime time on a Saturday night. An AUTOMATIC kiss of death for any new TV show.


In every episode Jeff Altman played the dumbass (very well), flanked by two beautiful Japanese ladies. Pink Lady were the stars of the show. But like a kazoo in the middle of an angelic harp solo, Jeff Altman's annoying presence made it unbearable.

I felt sorry for them.  They deserved better. American network TV can be very, very cruel.

Their American show and fame was extremely brief. The show only lasted for ONE MONTH. Only 5 episodes ever aired. And they never attempted an American comeback.

But in spite of this disaster, they did pick up some American fans, who saw through this horrible travesty. They have maintained an English fan site with more information and details on their history, music and current activity (they've reunited every few years....):