Sizzlean was supposedly a lower calorie, less fattening bacon substitute product that was smoked and cured like bacon, but made from pork shoulder instead of pork bellies (where bacon comes from.)

Pork shoulder is ironically one of the key ingredients of Spam, one of the most fattening foods on earth.

Sizzlean (on top of having one of the most grotesque names for a food product in history) was an abomination to bacon lovers everywhere. First, it ALWAYS remained soft in the pan, no matter how long you cooked it - there was no such thing as 'crispy' Sizzlean.

My mom however was a hardcore fan of this stuff, because it was cheaper than regular bacon.

Sizzlean was discontinued by 1985. And  today, it really doesn't look so bad now. Especially when compared to THIS atrocity today..... 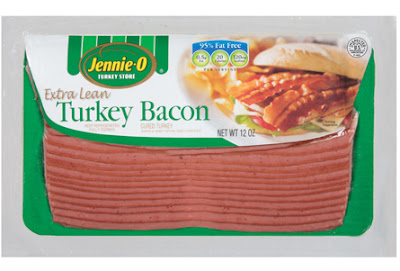 Posted by Larry Waldbillig at 6:39 pm