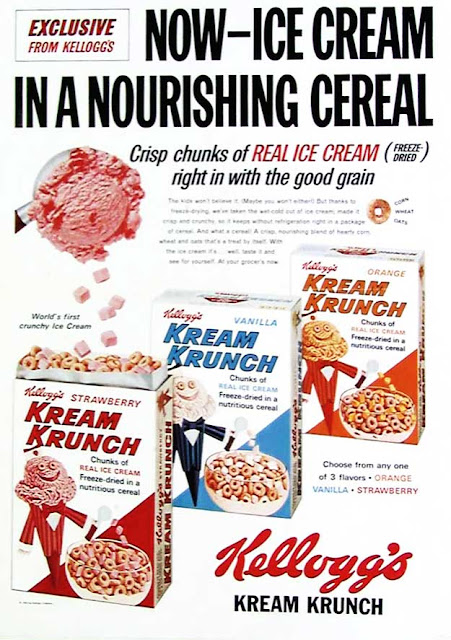 Ad copy above reads  "Now - Ice Cream in a nourishing cereal. Crisp chunks of real ice cream (freeze-dried) right in with the good grain. The kids won't believe it. (Maybe you won't either!) But thanks to freeze-drying, we've taken the cold out of ice cream, made it crisp and crunch, so it keeps without refrigeration right in a package of cereal. And what a cereal! A crisp, nourishing blend of hearty corn, wheat and oats that's a treat by itself. With the ice cream it's... well taste it see for yourself. At your grocer's now."

If anything gets the kids bugging their parents to the point of insanity in the cereal aisle, it's a cereal that contains something they really like. Raisins? Yuk. What kid really liked raisins in anything?

And all kids love ice cream. Especially that then-new freeze-dried space ice cream the astronauts get to eat that everyone on TV was talking about back then.

Soooooo, Kellogg's executives thought they had a winner in their new cereal, Kream Krunch. It was a Cheerios type cereal with bits of freeze dried ice cream in Strawberry, Vanilla and Orange flavours (though surprisingly, Kream Krunch didn't have a chocolate flavour.) 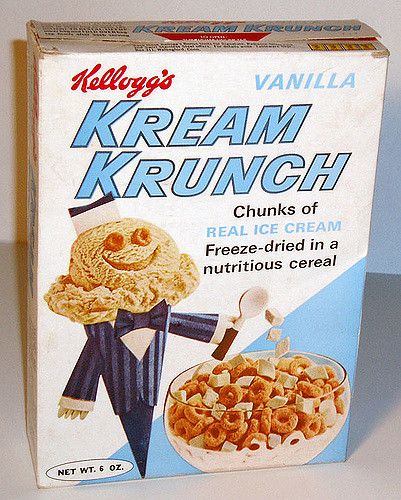 But ice cream for breakfast...Was America an awesome place in 1965 or what?

And it really did sound good.....But that's as far as Kream Krunch got. The flipside was the freeze-dried ice cream melted into a super gross, sticky goo after sitting in milk for a few minutes, so you had to eat it fast or without milk. (I eat my cereal dry with a glass of milk on the side to wash it down - That's how passionately I hate soggy cereal.)

Parents complained to Kellogg's, demanding refunds because when the freeze dried ice cream melted, kids would stop eating the cereal. And soon, they wouldn't touch the box at all and it would have to be thrown out. Kream Krunch was discontinued in 1966. And Kellogg's (or any other cereal company) never attempted another freeze-dried ice cream cereal.
Posted by Larry Waldbillig at 9:22 pm