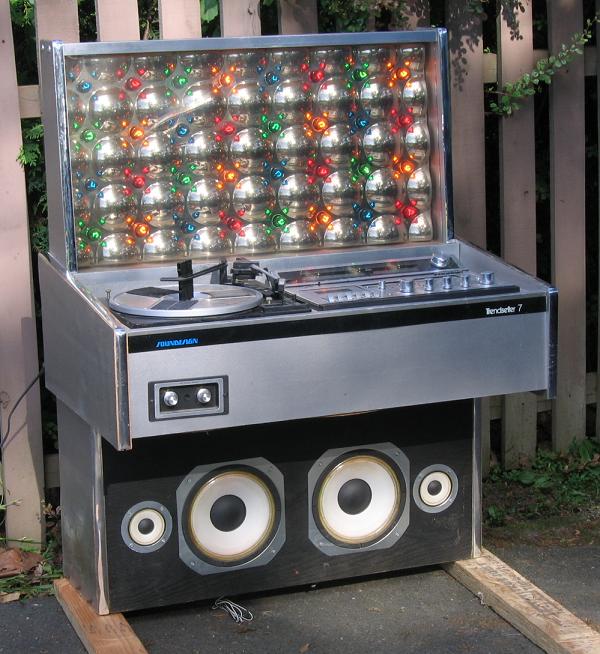 I've never been a fan of Soundesign. Especially their super chintzy '80s systems.

However in the '70s, Soundesign, while still an overall lowbrow electronics firm, did have the distinction of daring to be, um, different. And that's where we find this beast..

The Trendsetter 7 (which thankfully didn't set any trends) was a 200 lb disco themed monstrosity with an automatic three speed (33, 45 and 78 RPM) BSR turntable, AM/FM Stereo receiver, cassette and 8-Track tape decks that looked more like a jukebox than a home stereo system.

With the lighting system on in a darkened room, it looked like a real party starter


The amplifier pumped out a reasonable 50 watts per channel (perhaps the most powerful amplifiers Soundesign ever made) and was perfect for your inner Disco Stu.

But it IS a Soundesign product and while light years better than anything they made in the '80s, it did have some major drawbacks. The phono cartridge was ceramic and prone to picking up external vibrations. The tape decks got gummy with heavy use. The radio was actually very good and unusually selective and sensitive on FM. The AM section, while wide-band and very good fidelity wise had pretty crummy distant reception and selectivity, the stronger local AM signals tended to dominate. The cabinet was horrendously cheap, made of particle board and fell apart easily. With both speakers housed the same cabinet underneath, the bass was especially boomy.

Later models of this system were much smaller and had the speakers enclosed behind flashing lights. 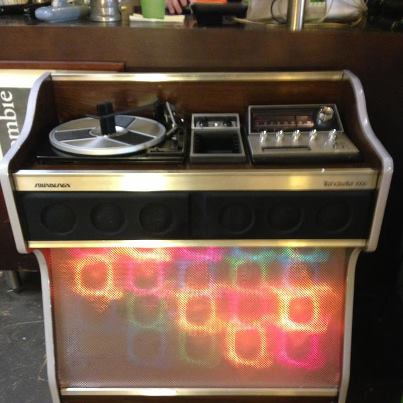 One model also had a overhead light with a small mirrored ball.

These stereos were never big sellers and the ones that were sold were usually destroyed after the disco bust. Finding a complete, intact unit is extremely rare and the few surviving ones that are in good condition sell for quite a bit.

Posted by Larry Waldbillig at 4:30 pm