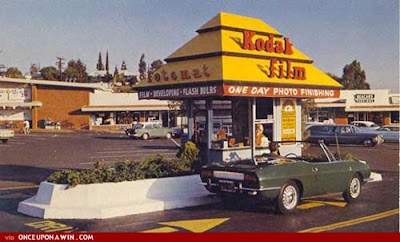 Before the era of digital and even one hour photo development, Fotomat kiosks were once ubiquitous in shopping centers across America. Yours Truly worked at one one summer in the mid-'80s.


It was just me, still in high school and a girl named Julie, a college student who worked there. Julie was a drop dead BABE and sweet and bubbly as soda pop - but already taken (Man! I was jealous of her boyfriend! I mean, he was a really cool guy to me and all. And I had to be really cool to him, but....Still...)

Julie had the morning/early afternoon shift and I had the afternoon/evening shift and closing.

Fotomat offered one DAY photo processing. A JOKE today, but at that time, it was still very much standard (although the first one hour processing places in drug stores were appearing. But not so much to give us any SERIOUS competition. Not just yet.)  Our biggest selling point was still pure and simple All American drive-thru convenience. And for a lot of people, we were good enough for them.

We also sold Kodak and Konica film, batteries and even flashcubes/bulbs for your old trusty '50s/'60s/'70s cameras. Even Polaroid film was available (yes, we even showed them some love!) Disposable cameras were still a few years away.

The customer would drive up to the kiosk and drop off his/her film rolls, which the customer would pay for and we would take down their names/addresses/phone numbers on an envelope (or they would take an envelope and do it themselves, making things a LOT faster), put the film inside and pay for their purchase and we would wait for the pick up/delivery person to come and get them/drop off finished photos. They came twice a day - usually at noon and again around 6pm to take the film to Seattle and return them the next day. So between pick-up/deliveries and taking orders/returning finished orders, it was mostly a pretty laid back job. A lot of tedium. But for minimum wage, it was worth it. And for me, not so much an outgoing "socially active" person in public, it was PERFECT.

And contrary to popular belief, Fotomat kiosks were air conditioned in summer and well heated in the winter. "Lavatory use" was provided by a nearby AM/PM gas station/mini-mart who's franchise owners, a sweet older Indian lady and her husband were one of our friendly regulars (they often brought us sackfuls of cheeseburgers, hot dogs, burritos, BBQ Pork "rib" sandwiches - anything pulled and sodas along with their film.) And we didn't care if they were just pulled from the heat lamps and a little dry (well, maybe Julie did more than I - which is probably why she never ate much of it if it came on her watch and left most of it for me.) But to a hungry young man like I was - and still am (though not quite so young), chow is chow.

And if you've ever seen Tommy Chong's character in That '70s Show, you know just how "laid back" a photo kiosk was. But even though on the surface, it looks like the perfect place to "smoke 'em if you got 'em", the reality was you never knew who could show up at any given time (regional managers would make surprise visits.) Cops also developed their personal/family film there too. So it wasn't always as easy to get away with that as it would appear.

In the '80s, we had no internet or any kind of social media to play with to pass the time (would have been PERFECT.) So a lot of the time between customers and pickup/deliveries of film - gaps of between 10 - 30 minutes weren't unusual, was spent listening to the radio and reading magazines, library books and newspapers. Actual LINES of cars were rare, but the busiest day I had that summer was the day after the 4th of July. That was my biggest line at one time, five cars, all done in less than 6 minutes. Julie said she dealt with an eight car line that morning.

But there were problems. The worst was having film or photos lost or misplaced at the processing center. We made sure everything was organized and accounted for on our part. But accidents still happened on the other end. Dealing with angry people was a real problem sometimes. We had a hotline number we gave them. But sometimes that wasn't good enough and understandably so - people's memories were on that film. Fortunately for me, that only happened once.

And the occasional robbery. We never kept more than $50 at any time in the till. But I never had a robbery in the whole time I worked at Fotomat (Julie wasn't so lucky.)

It was sad seeing the Fotomats disappear soon after I left as one hour photo processing became standard. But it was one of the best jobs I ever had. No pressure to overachieve, low stress. And one I actually MISS in spite of the low pay and occasional boredom.

And one I'll never forget.
Posted by Larry Waldbillig at 4:33 am