Those Little $30 Chinese Tablet/Netbook Computers: Are They Worth It?

You've probably seen these little 7" inch Android tablets with sleek keyboard cases that resemble '80s/'90s day planners on eBay or Amazon. You can also buy these tablets on their own without keyboards for around $30 and they come in different colors. But we're going to try out the keyboard case and to really put this to the test, write this entire post on it.


First, this does have functioning apps and does work. It is the right size for your backpack or large handbag and setting/booting it up takes about the same time. This handles YouTube playback respectably well. There's no touchpad or mouse, so most selecting is done onscreen with your fingers. If your demands are very basic, Google oriented and simple, this does work on that level.
But I ran a few more performance tests on it with a screen recorder app to test speed and multimedia performance.


In spite of it's Q88 quad-core chipset, at 512 MB of RAM, this is not very fast at multitasking. It can stream internet radio through VLC while working with the most of the non-video apps. It also handles TuneIn reliably through it's app while surfing the Firefox, Twitter, Facebook, Google Docs and Gmail apps. The screen recorder app's audio input comes from the built in condenser mic, so whatever sounds are around you as you record from the display will be caught on the resulting video (in my case, the bedroom fan.) The volume on the video was set at max (as your ringing ears can tell you.) The sound comes from a tiny monaural button speaker on the rear of the tablet, so it isn't very loud from an average listening perspective. 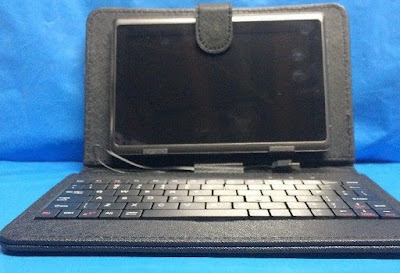 Second, the screen at 7'' wide is an issue for me as my ability to read fine print requires me to carry a magnifying glass. You could stretch out the display with your fingers, but finding the sweet spot between readability and screen size can be a challenge on some web versions of news sites.

The keyboard case was of particular interest to me as my big clumsy fingers are especially problematic with touch-screen keyboards and while a larger size, some keys (such as the " ') key is located at the bottom of the keyboard. The keys also require a firm press each to enter, so I still end up peck-typing, but the keyboard real estate area is larger.

You can buy these with keyboards or without. And the other good thing is when these tablets die (usually in about three years), you can replace them while keeping the case. If you enable Google Drive for backups, your work can be saved when you change tablets.

Compared to my standard desktop, I probably would not write another post directly on this thing again. But it is good for making middle of the night drafts with Google Docs. But it's too slow for serious school and office work.

As a serious student/office computer, you'd be better off with a real netbook/laptop. But if you just need a simple electronic day planner (the Google Calendar app does a great job) that does a little more, this may fit the bill.
Posted by Larry Waldbillig at 9:59 pm