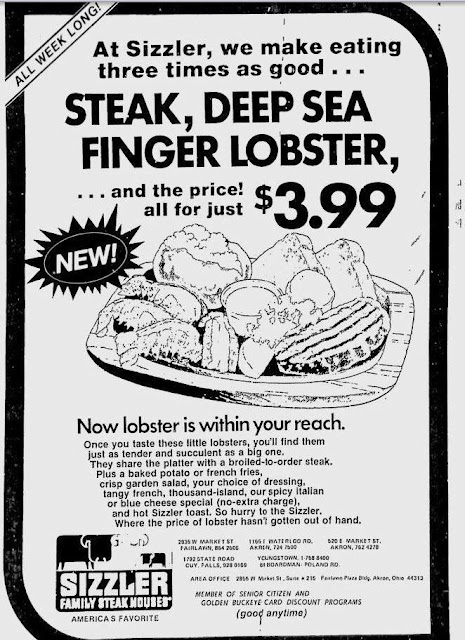 I saw this 1977 Sizzler ad on Pinterest and it gave me a flashback to this 1983 commercial.


I’m not an expert at seafood (I’m actually allergic to it and I'm also revolted by the smell.) But even back then, this sounded suspicious. Because I have never heard of this type of lobster before. Ever.

And I’ve never heard of it since. So what was it? Lobsters shaped like an obscene gesture?

My first hunch then and the one I still hold now was baby lobsters. The inevitable trawler bycatch that wouldn’t satisfy any serious hardcore lobster lover. But served in quantity with a mouthwatering new name and target it to trendy young adults? New menu item.

So I did some research. And this is what I came up with under “Deep Sea Finger Lobster”: Nothing.

No scientific Latin name, no sub-species listing. No taxology of any kind.

As far as I know, they were only sold at Sizzler restaurants. However some have mentioned other places where this was available.

Posted by Larry Waldbillig at 7:13 am