The longwave (or LW) radio band is one you've probably never heard of if you live in the Western Hemisphere.

LW radio is mostly used in Europe and some countries in Asia. Long wave radio signals work similarly to AM. The signals cover a vastly wider area during daylight hours than standard AM because LW transmission relies mostly on ground waves, rather than skywaves (like standard AM and shortwave.) And because of their extremely long range, there are only a handful of countries in Europe with LW stations

Yes, LW is really as far down as you should wisely go on the radio dial.

But the advantage of LW is it has an incredibly long range covering hundreds, even thousands of miles during daylight hours with a steadier, non-fading signal.

But LW in Europe today is regarded like AM in the Americas, a radio band for older people who remember it and it's use and listenership has severely declined in favour of higher fidelity FM and digital signals. But it is still fairly popular, especially for older British and European people living or commuting around the continent. It's also less affected by terrain than AM and especially FM and high frequency digital signals. It's also possible to drive from Spain to Austria and never lose the signal.

And I know what you're going to ask; Why didn't we have LW radio in this hemisphere?

Well, there's no easy explanation for that. Many factors come into play, but mostly it was the fact that LW was simply never allocated internationally as a specific broadcast band in the Western Hemisphere. Another is there are only 15 channels in the LW band and 107 channels on AM, later to 117 in the late 1980s with the expansion of the AM radio dial from 1600 to 1700 kHz.

Yet another is the LW signals are so vast, they would interfere with each other. And finally, they're more susceptible to electronic interference than even AM.

However, that doesn't mean we weren't trying to use it. 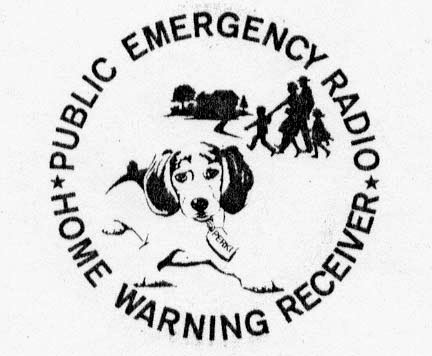 In the 1970s and '80s, there was a planned civil defense radio network in the US called Public Emergency Radio. The network would broadcast on 167, 179 and 191 kHz.

The flagship station of this network was WGU-20 on 179 kHz out of Chase, Maryland.

Signing on in 1973, the purpose of WGU-20 and it's planned sister stations was to broadcast news and information to Americans in the event of a nuclear war. The station was always in test mode, 24/7.

However, listening to WGU-20 wasn't much fun. There was no music, no sports or casual talk on WGU-20 throughout it's life. No wacky morning zoos or outrageous contests either. WGU-20 only aired it's station ID, time checks and weather reports for the mid-Atlantic coast

The advantage of using an LW signal rather than standard AM or FM signal was because as I mentioned earlier, LW signals travel through the ground rather than the sky. And that's where most of us (hypothetically) would be in a nuclear war - underground. In bomb shelters.

Second, radio direction guided missiles would have more difficulty homing in LW signals because they don't rely on sky waves. Besides, since radio towers are above ground, they would likely be destroyed or unusable due to radioactive contamination.

And LW stations have the same purpose in other countries. In The Letters of Last Resort, which are the considered the final acts of Her Majesty's Government in the event the UK is destroyed in a nuclear war and the Prime Minister and second in command are killed. One of the protocols given to UK nuclear submarine commanders is to listen for BBC Radio 4 on it's 198 kHz LW frequency. Because LW signals not only travel well underground, but underwater as well.

If there is no signal and all other protocols for verifying the worst have been followed and the UK is no more, the commander may retaliate with his/her submarine's nuclear weapons, not retaliate, join a commonwealth country like Canada or Australia or an allied nuclear power like the US or France. The exact orders can vary and change with each new Prime Minister.

And while LW is disappearing from modern European radios, it's worth noting how important it still is; UK submarines on patrol were reported to have briefly gone on nuclear alert in 2004 when BBC Radio 4's LW signal mysteriously went off the air for 15 minutes.

But while WGU-20 made it to the air, the other planned LW stations in the network did not.

First, we were pretty satisfied with the Emergency Broadcast System. Which is now called the Emergency Alert System, of which those ear splitting digital data bursts have replaced the once annoying, but comparatively easier on the ears 1 kHz audio tone.

Second, manufacturers balked at the idea of including LW tuning components in newer radios, which would add to the expense of manufacturing and ultimately serve no real purpose.

And third, with political pressure in the government cutback happy 1980s and the collapse of the Eastern Bloc in 1989 and 1990, there was really no need for such a network

However, if you're curious to hear what LW radio sounds like, there's a tunable WebSDR in Peterborough, UK you can use to sample the European LW dial.
Posted by Larry Waldbillig at 2:18 pm