Classic Ghetto Blasters of The '80s


No photo does justice to this one - this one is, to this day the BIGGEST ghetto blaster ever made. It sported an AM/FM/Shortwave radio, which was a strange feature on many portable stereos in the '80s.

No American teenager actively listened to shortwave radio back then - in spite of stations like the English transmissions of Radio Moscow (which broadcasted Western rock music that would get any Soviet teenager sent straight to the gulags if they were ever caught listening to it. With a healthy dose of anti-American propaganda in spite of the fact many of the Western rock acts they did play were AMERICAN.)

Secondly, the low-fi, wildly fluctuating unevenness and irregularity of the shortwave radio signal made music listening on it an endurance test. My guess was the manufacturers were thinking of some phantom jet-set people who wanted to take a radio with them that could allow them to pick up The Voice Of America or the BBC World Service should they wind up in say, Nairobi. But the size of this ghetto blaster (the actual size of a suitcase), to say nothing of the weight (30 lbs. - with the 10 - yes, I said 10 - "D" cell batteries required to feed this thing off of the AC power grid) and weight (did I mention the $200 - about $400 in 2012 dollars) price tag?) guaranteed this radio was STAYING in America.

It had a dual cassette (one deck was a player that you inserted a cassette into it like a car stereo) while the other was a typical ghetto blaster player/recorder for dubbing your Iron Maiden tapes (for your friends in Nairobi) both with auto-reverse, a 5 band graphic equalizer, a Loudness button (for extra punchy bass) through the 12" speakers and countless other buttons as well as a light show in itself just to make this work.

Lasonic went ass over tea kettle (whatever that means) on this product. But even though Lasonic (who?) weren't a very well known electronics name like Sony, Panasonic or Aiwa, this radio became so influential on the TRUE ghetto blaster folks (early rap stars), that Lasonic reissued the TRC-931 in 2007, with iPod connections replacing the often faulty dual cassette system. I really think, why not just BUILD an MP3 player/recorder into it, using thumb/flash drives (the cassettes of today?)

Portable stereos in the early '80s were HUGE things only for the most headstrong music fan when a simple Walkman won't do.

But by the mid '80s, they started getting smaller...and smaller.

I'm not sure if it was the lawyers were getting on them for the hernia problems these huge radio/tape decks were potentially causing for kids at school (I mean with 30 lbs. of boombox and cassette tapes on one arm and another 30 lbs. of Trapper Keeper and books on the other.). But the rockin' out sure took a hit.

Then it really got colourful:

Then these things started showing up. The Sharp QT-50 from 1985. A sort of retro-trip in pastel colours (pink, lavender, peach, seafoam green, banana yellow, powder puff blue and even beige) that even the girliest of girls and gayest of guys get nervous at today just looking at this thing. But 1985 was also the year of guys wearing pink polo shirts and Miami Vice.

There were 8-track capable sets 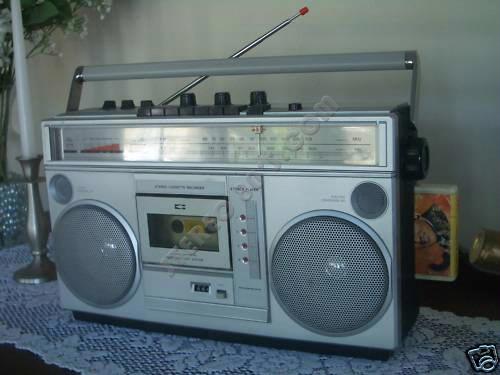 ...and those with TVs 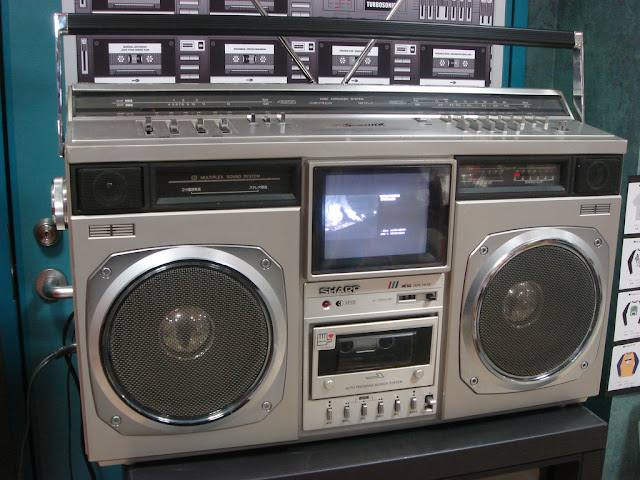 Some even had turntables (for warping and scratching your records while playing volleyball on the beach.) 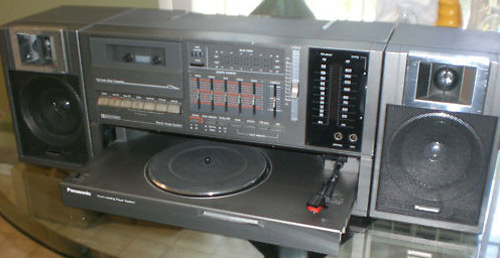 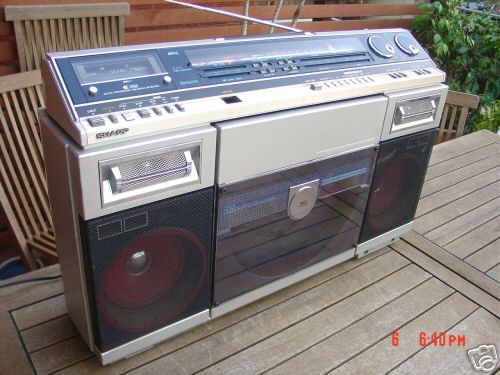 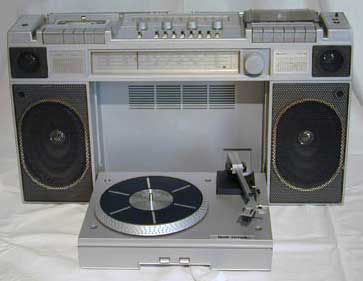 Sadly...by 1990, the portable stereo had become, seen-one, you seen 'em, all black things in weird shapes with CD players. They brought the colours back too more recently, but I still wish they made them like those BIG powerhouses from back in the day....

Posted by Larry Waldbillig at 6:18 am