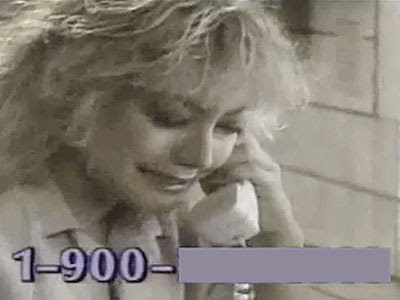 It's 1990. You're watching a late night movie on a crummy local UHF TV station and eating Top Ramen. Your life really sucks. You're broke, working at a worthless job that even the most desperate undocumented worker wouldn't put up with and putting around in a smelly beat up used sub-compact car and no self respecting chick would give a creep like you the time of day.

And then.....You see these commercials:

Yep. For just $2.99 to $10 (per minute), you could have a sex crazed love goddess with big hair straight out of 1985 talking to YOU anytime you want on your landline phone. Imagine that!

These commercials aired late nights only (due to FCC restrictions on such hours when kids could be watching - so always after 10pm local time.) But the operators of these numbers knew their target audience: The lonely and insecure.

The 900/976 premium number had been around since the late '70s. But it was used primarily as a specialty number and originally incurred normal long distance charges. That changed in the early '80s. But few people knew of them until the late '80s when the first "entertainment" lines appeared. Then the phone sex lines


(The ending of the belated 1987 video of Aerosmith's 1976 classic "Sweet Emotion" illustrated what these "hot" women with such sexy voices REALLY looked like. With frightening accuracy....)

And even shadier types began to exploit them. One number was directed at children and marketed itself through a TV advertisement during kids shows.

If the kid watching was too young to dial a phone, no biggie - the TV commercial contained DTMF tones (the tones you hear while dialing up numbers on a push button phone.) So all he/she had to hold the phone receiver up to the TV speaker when instructed and the DTMF tones contained in the commercial would conveniently dial the number for them through the mouthpiece of the receiver. One family was hit in 1987 with a $17,000 phone bill. So new laws were enacted to prohibit usage of 900/976 numbers towards children.

Soon, numbers for horoscopes, trivia games, health advice and contests began appearing everywhere. TV infomercials and books on how to get into this racket also began appearing. 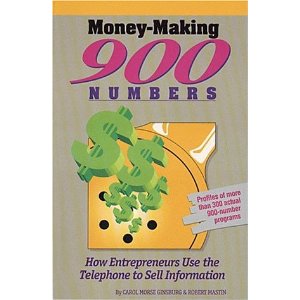 But none of these offerings were more profitable than the phone sex line.

In the early 1990s, the internet was just barely getting attention and was still a geek toy with not much content. Most people didn't even have computers then and what little content there was was subject to per minute usage fees. And 14k dial-up only. It would be another few years before Windows 95 and it's internet connectivity would revolutionize everything. Namely in the sex/porn industry.

Needless to say, these operators made a lot of money, some becoming multi-millionaires in a few years. And all was well - until you got the phone bill.

There were numbers for that too:


(Dionne Warwick was a pop superstar who became a spokesperson for The Psychic Friends Network in the 1990s, encouraging viewers to call a 976 number to get a prediction of their futures from a "real psychic" via late night infomercials. In a sad twist of irony, the infomercials severely damaged her career, she lost her fortune due to mismanagement and in March 2013, had to declare bankruptcy. Her psychic friends had no comment.....)

Psychic hotlines were also huge moneymakers for 900/976 operators. They were also one of the strangest - the "psychics" seemed to ask more questions than the callers.

New legislation also made it difficult for operators to automatically begin charging when someone called the number.

When broadband internet finally became ubiquitous nearly everywhere by the early 2000s, the 900/976 numbers were no longer profitable and are largely abandoned today.
Posted by Larry Waldbillig at 12:00 am